To share your memory on the wall of William Hampton, sign in using one of the following options:

Provide comfort for the family of William Hampton with a meaningful gesture of sympathy.

He was a graduate of J L Mann High School and also he attended Greenville Technical College. He was employed at Augusta Circle Elementary School. He was a member of Holy Ground Church of Deliverance. He was a drummer for HAMP Gospel Group.

He was preceded in death by two brothers, Dwight David Hampton and John Fitzgerald Hampton.

We encourage you to share your most beloved memories of William here, so that the family and other loved ones can always see it. You can upload cherished photographs, or share your favorite stories, and can even comment on those shared by others.

Gwendolyn Brown sent flowers to the family of William Hampton.
Show you care by sending flowers 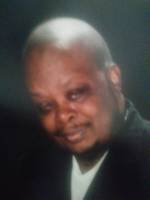