To share your memory on the wall of St. Rosa Barbara Williams , sign in using one of the following options:

Provide comfort for the family by sending flowers or planting a tree in memory of St. Rosa Barbara Williams

Her husband of 32 years, John Robert Allen Williams, preceded her in death along with two sons, Thomas A. Williams and William S. Williams; and two daughters, Francis Y.Williams and Mamie L. Williams.

St. Williams joined The United House of Prayer for All People in 1934, where she received the Holy Ghost and worked out her soul salvation. She was a Maid, Girl Scout, and on the Drill Team for Precious Daddy Grace. She was the recording secretary and the last original member of the Queen Board of which she served on for over 80 years. She was the recoding secretary for the Benevolence Committee and assistant recording secretary for our local cabinet, all under the leadership of both Precious Daddy McCollough and Precious Daddy Madison. She was blessed to work under all three Bishops. She was also the Secretary and Treasurer of the West Greenville Community Club. She was the oldest resident in the West Greenville Community.

We, the family are truly grateful for God giving us such a remarkable mother and grandmother who lived the life as a true Saint.
Read Less

We encourage you to share your most beloved memories of St. Rosa Barbara here, so that the family and other loved ones can always see it. You can upload cherished photographs, or share your favorite stories, and can even comment on those shared by others.

FAHMily Love, GTC BOOKSTORE CO WORKERS, and others have sent flowers to the family of St. Rosa Barbara Hudson Williams .
Show you care by sending flowers

Posted Feb 22, 2020 at 01:34pm
St Williams was the epitome of what a real lady should be. She always greeted me w/a smile & kind words. She taught me how to work & be dutiful in the HOP. She was always in her uniform as a queen. She was that strong matriarch of her family. You will be missed St Williams. I thank you for everything that you taught me. St. Traci Williams N. Charleston, SC
Comment Share
Share via:
FL

Posted Feb 21, 2020 at 12:19pm
Please accept our most heartfelt sympathies for your loss... Our thoughts are with you and your family during this difficult time.

Posted Feb 20, 2020 at 10:26pm
To the Williams Family,
Now is the time for gathering all the best of a good life and holding it dear to your heart.
St. Barbara Williams’ time on this earth exemplified all the Best of A Well Spent Good Life.
Hold those memories in your heart forever.

Posted Feb 20, 2020 at 01:25pm
So Sorry to hear of mrs. Williams passing ,she was truly a woman of god
Take your Rest Love Liz.
Comment Share
Share via:
GW

Posted Feb 20, 2020 at 12:52pm
Please accept our most heartfelt sympathies for your loss... Our thoughts are with you and your family during this difficult time. 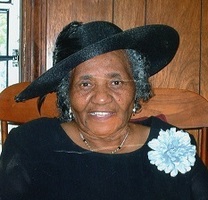