To share your memory on the wall of Sharron Burgess, sign in using one of the following options:

Print
Ms. Sharron Cheryl Burgess, 60, of Easley, passed on Wednesday, May 27, 2020, at Fleetwood Rehabilitation and Healthcare Center. She was the daughter of the late Bobby Henderson and Mildred Burgess Allen.

Surviving: one daughter, Summer... Read More
Ms. Sharron Cheryl Burgess, 60, of Easley, passed on Wednesday, May 27, 2020, at Fleetwood Rehabilitation and Healthcare Center. She was the daughter of the late Bobby Henderson and Mildred Burgess Allen.

Receive notifications about information and event scheduling for Sharron

We encourage you to share your most beloved memories of Sharron here, so that the family and other loved ones can always see it. You can upload cherished photographs, or share your favorite stories, and can even comment on those shared by others.

Posted Jun 04, 2020 at 02:19pm
So sorry to hear about Cheryl. My deepest sympathies to Summer and the rest of the family.
Michelle Robinson & Family
Comment Share
Share via:
V

Posted Jun 01, 2020 at 10:28am
Ms Cheryl was a wonderful beautiful person I will truly miss her she was one of kind and a very dear friend to me my heart is broken but I know heaven got a beautiful angel my prayers go out to all of her family and friends I love you nd Cheryl and will miss you everyday until we meet again
Comment Share
Share via: 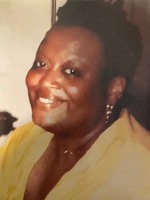