To share your memory on the wall of Rev. Allen Freeman, sign in using one of the following options:

Provide comfort for the family by sending flowers or planting a tree in memory of Rev. Allen Freeman

Provide comfort for the family of Rev. Allen Freeman with a meaningful gesture of sympathy.

He was a graduate of Sterling High School. He joined the United States Army and retired as a Master Se... Read More
Rev. Allen C. Freeman was born on August 1, 1931, in Greenville County. He was called home to be with the Lord on April 13, 2020.

He was a graduate of Sterling High School. He joined the United States Army and retired as a Master Sergeant after 21 years of service. He was a Pastmaster of the White Horse Road Masonic Lodge #200.

Rev. Freeman was an associate pastor at Lincoln Street Baptist Church. He had a passion for helping others and was a volunteer for several different organizations. He also served as Chaplain for many years at St. Francis Hospital.

He was preceded in death by his wife, Eleanor Hunt Freeman; a brother, Wade Donald, Jr., and a sister, Lula Mae Leaks.

Receive notifications about information and event scheduling for Rev. Allen

We encourage you to share your most beloved memories of Rev. Allen here, so that the family and other loved ones can always see it. You can upload cherished photographs, or share your favorite stories, and can even comment on those shared by others.

Posted Apr 27, 2020 at 10:04am
I came to know this dear man through my work at Loaves & Fishes. He was always there with a smile and love for those who he was feeding with the donations. He always had a kind word and I am so grateful to have known him.

Posted Apr 16, 2020 at 01:52pm
Please accept our most heartfelt sympathies for your loss... Our thoughts are with you during this difficult time.

Posted Apr 14, 2020 at 10:19pm
Rev. Freeman was a very good person. During the time of my mother's illness he was there for me and my family every time we called upon him no matter the time or place. My prayers for his family and friends. He will be greatly missed (R.I.P.).
Comment Share
Share via: 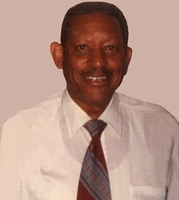