To share your memory on the wall of Phillip Edwards, sign in using one of the following options:

Print
Trust in the Lord with all your heart and lean not to your own understanding; Proverbs 3:5.

Acknowledging that it is necessary to change one’s heart, Phillip J. Edwards walked faithfully, trusting an... Read More
Trust in the Lord with all your heart and lean not to your own understanding; Proverbs 3:5.

Acknowledging that it is necessary to change one’s heart, Phillip J. Edwards walked faithfully, trusting and believing that God is able do all things. There was nothing that he couldn’t hope and believe God for. Therefore, when he was summoned on Monday morning, September 9, 2019, he hastened to the call of the Almighty God with eagerness.

Born to Thelma and the late John Edwards, Sr., on October 7, 1964, Phillip was reared in Camden, New Jersey, and later moved to Charleston, South Carolina. He completed his education in Philadelphia, Pennsylvania. He also served in the United States Army. His journey was at times compromising and yielded to unfavorable challenges, yet by the grace and mercy of God, he made a decision. This decision led him to Greenville, South Carolina, where he met his love, Alberta Wilson Edwards. Though the duration of their marriage would seem to be a short time to some, because it was ordained and part of a master plan, this time was full and rewarding and gratifying to the Glory of God.

Phillip was first introduced to the power of the Holy Ghost while attending Faith in Action in North Charleston, SC. After moving to Greenville, he soon met a man who would play a huge role in mentoring and leading him to become the servant and Gospel messenger of the Kingdom of God. Jerry Wilson became his pastor at that moment and Phillip served faithfully under his leadership. Though his message was not delivered from the pulpit, it was presented in
Read Less

Receive notifications about information and event scheduling for Phillip

We encourage you to share your most beloved memories of Phillip here, so that the family and other loved ones can always see it. You can upload cherished photographs, or share your favorite stories, and can even comment on those shared by others.

Comcast BSC Family, Tony Dillard, and others have sent flowers to the family of Phillip Jerome Edwards.
Show you care by sending flowers

Posted Sep 12, 2019 at 11:11am
Sending my prayers and condolences to the Wilson and Edwards family in the loss of your loved one, may God bless you all and give you strength during this time of bereavement. Irene and Rose Hamilton 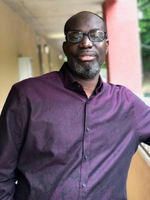