To share your memory on the wall of Nannie Rosemond, sign in using one of the following options:

Provide comfort for the family of Nannie Rosemond with a meaningful gesture of sympathy.

She was employed at JP... Read More
Mrs. Nannie Geneva “Sister” Chiles Rosemond, 84, of Piedmont, South Carolina, passed on Monday, April 20, 2020, at Prisma Health Greenville. She was a daughter of the late James and Nannie McCullough Chiles.

She was employed at JP Stevens-Parker Plant for 35 years, and Carolina Blouse for 25 years. She was a member of Long Branch Baptist Church, where she participated as President of the Usher Board, Treasurer of the Missionary and a member of the Senior Choir.

Receive notifications about information and event scheduling for Nannie

We encourage you to share your most beloved memories of Nannie here, so that the family and other loved ones can always see it. You can upload cherished photographs, or share your favorite stories, and can even comment on those shared by others.

Posted Apr 27, 2020 at 01:14pm
To Al & Linda, on behalf of the Class of ‘70 of Sterling High School, you have our sympathy. May GOD strengthen and comfort you at this most difficult time. We love you and are praying for you and the rest of the family.
❤️❤️❤️
Brenda C. Henderson
Brenda C. Henderson
Comment Share
Share via:
HS

Flowers were purchased for the family of Nannie Rosemond. Send Flowers

Posted Apr 23, 2020 at 12:13am
What a beautiful lady! She and my mother, Peggy Wilson worked together for many years. I can still remember them flying to Michigan. My sister & I were at the airport to see them off and welcome them back home. Praying for the family.
Comment Share
Share via:
JL

Posted Apr 22, 2020 at 11:12pm
I worked at Parker Plant with Mrs. Nannie Rosemond. She was a very lovely lady and she always had a sweet spirit. The family has my sincere sympathy and prayers for peace and comfort in her passing.
Comment Share
Share via:
AG

Posted Apr 21, 2020 at 10:18pm
We are saddened to hear of the passing of Nannie "Sister". I asked a cousin about her a few weeks back. Please know others are sharing your grief as well. Her mom, (Aunt Nannie) and our mom, (Sadie) were the best of friends beginning from childhood until Aunt Nannie received her wings. When sadness fills our hearts, sometimes we must believe what we can't see. May God show you the way to new hope, peace, and happiness. 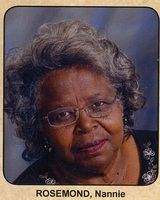