To share your memory on the wall of Nannie M. Agnew Kilgore, sign in using one of the following options:

Provide comfort for the family by sending flowers or planting a tree in memory of Nannie M. Agnew Kilgore

Provide comfort for the family of Nannie M. Agnew Kilgore with a meaningful gesture of sympathy.

Print
Mrs. Nannie Mae Agnew Kilgore, the daughter of the late O.B. and Emma Bruster Agnew, was born in Greenville County, South Carolina, on May 21, 1928, quietly gained her Heavenly wings on November 3, 2019, at her home for over 50 years.

Af... Read More
Mrs. Nannie Mae Agnew Kilgore, the daughter of the late O.B. and Emma Bruster Agnew, was born in Greenville County, South Carolina, on May 21, 1928, quietly gained her Heavenly wings on November 3, 2019, at her home for over 50 years.

After the untimely deaths of her parents, she was raised by her uncle and aunt, Lewis and Mamie Agnew Anderson of Simpsonville, South Carolina, and was the only surviving member of her immediate family.

She was a retired dietician at J. Healthcare in Simpsonville, and was a breast cancer survivor for over twenty years.

She was preceded in death by her husband, Cornell; a brother, O.B. Agnew; a daughter, Dora K. Norris; and a granddaughter raised in the home, Kristy Kilgore.

A powerful legacy lead by Her God – Fearing faith.

She was a very quiet person and was loved by many that affectionately called her, Mama and Granny and will be missed by her four generations of family and friends.
Read Less

We encourage you to share your most beloved memories of Nannie M. Agnew here, so that the family and other loved ones can always see it. You can upload cherished photographs, or share your favorite stories, and can even comment on those shared by others. 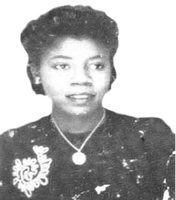