To share your memory on the wall of Mattie Coleman, sign in using one of the following options:

Mattie attended Carver Public School and Dunbar High School in Bessemer. Upon completing her education, she began working in the healthcare industry, first as a dental assistant and later as a nursing assistant at Bessemer Carraway Medical Center. When she retired, Mattie moved to Greenville, South Carolina to live with her daughter, Jo Ann and son-in-law, Joe.

Receive notifications about information and event scheduling for Mattie

We encourage you to share your most beloved memories of Mattie here, so that the family and other loved ones can always see it. You can upload cherished photographs, or share your favorite stories, and can even comment on those shared by others. 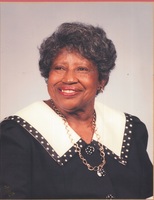