To share your memory on the wall of Lonita Johnson, sign in using one of the following options:

Provide comfort for the family of Lonita Johnson with a meaningful gesture of sympathy.

Print
Ms. Lonita ‘Nita’ Clyde Johnson, 76, of Greenville South Carolina, departed this earthly life on Thursday, October 17, 2019, at her home. She was the eldest child of the late Clyde Douglas Johnson and Miriam Azalee Parker Johnson.

Ms. Lonita ‘Nita’ Clyde Johnson, 76, of Greenville South Carolina, departed this earthly life on Thursday, October 17, 2019, at her home. She was the eldest child of the late Clyde Douglas Johnson and Miriam Azalee Parker Johnson.

Lonita moved to Astoria, Queens, New York, at the age of 25, then later moved to Long Island, New York. While in New York she earned an Associates Degree in Accounting from Queens College.

While in New York she was an active member of Community Church of Astoria where she sang on the Inspirational Choir.

Lonita returned to South Carolina in 1995 to help care for her mother. She obtained a job at South Carolina Steel Corporation in Greenville and worked there until her retirement.

She joined Long Branch Baptist Church in 1998. She was a member of the Pastor's Aide and also volunteered as needed in any capacity. She was also an usher or as we called her the "Gate Keeper of the Branch".

Lonita was very instrumental in the opening of OJ’s Diner in 2005. She enjoyed spending time with her family. She loved to cook, going to the movies, going out to eat and traveling. She loved to shop with friends and was a snazzy classy dresser, who could slay a hat and a pair of shoes with accessories to complement her million dollar smile.

She was preceded in death by her sisters, Thelma Johnson, Diane Ferrell, Georgia Johnson and a brother Terrell Johnson.

Receive notifications about information and event scheduling for Lonita

We encourage you to share your most beloved memories of Lonita here, so that the family and other loved ones can always see it. You can upload cherished photographs, or share your favorite stories, and can even comment on those shared by others.

Your NewSpring VHQ Team, SC Steel, and others have sent flowers to the family of Lonita Clyde "Nita" Johnson.
Show you care by sending flowers

Posted Oct 23, 2019 at 07:13am
Please accept our most heartfelt sympathies for your loss... Our thoughts are with you and your family during this difficult time.

Posted Oct 19, 2019 at 04:17pm
My friend and sister in Christ. We worked together for many years and have been friends since. I will truly miss her. May God bless her family at this sad time.
Comment Share
Share via:
EP

Posted Oct 18, 2019 at 05:23pm
Throughout my life, a lovely, beautiful, sweet, cousin you were. One who loved family..
I would be excited when family members would say..Lonita is coming home‼🥰 you were
always classy, stylish, and stunning💕💞 . As sorrow comes, as it must..You will be missed..
Comment Share
Share via: 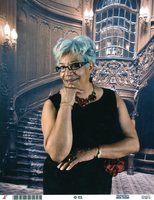