To share your memory on the wall of Leroy Richardson, sign in using one of the following options:

Provide comfort for the family of Leroy Richardson with a meaningful gesture of sympathy.

Often referred to as a good man, a legend and a giant among men, Leroy led an extraordinaire life of ninety-two years. He earned many titles such as son, brother, husband, daddy, granddaddy, “Pa Pa”, great granddad, great-great grandfather, uncle, cousin, friend, healer, civil rights pioneer and veteran. He was known for his easy smile, quick wit, beautiful spirit and caring heart. Leroy was widely respected and well-liked by all who encountered him.

Leroy was blessed with longevity genes coming from a long line of Ellis family members living well into their senior years. His mother, grandmother and great grandfathers were octogenarian and nonagenarians during a time when the average life expectancy was less than half those years. He enhanced his genetic blessings with hard work resulting in good health and phenomenal memory until the end.

Leroy was a man’s man who believed it was his responsibility to protect and provide for his family. He believed in working hard and enjoying a strong drink and good food. He loved watching games of his favorite teams, the Clemson Tigers and New York Yankees. Leroy was a master storyteller with endless stories, a wonderful sense of humor and a resilient spirit. Despite never having the opportunity to finish grade school, he and his wife, Jessie, ensured that all eleven of their children had the gift of education. Their encouragement and sometimes, insistency, resulted in their children achieving specialized training, bachelor’s, master’s and doctoral degrees in a variety of careers.

Working since he was a young boy to assist his family during times of financial adversity, Leroy held a number of jobs, many at the same time. However, Leroy was best known as one the longest serving YMCA employees. He retired from his beloved Y in 2018 after a 68 year career as a masseuse. His famous ‘rub downs’ were a fixture at the “Y” through the decades even having generations of regulars to request his healing hands.

Leroy was recently honored for his pioneering military service as a famed Montford Point Marine serving at Camp Lejeune in North Carolina during World War II. In 2012, President Obama recognized these Marines with the Congressional Gold Medal for their service to the nation as the first African-Americans to enlist in the U.S. Marine Corps. True to his humble nature, when he heard about the honor, he remarked that he had not done anything special enough to deserve the recognition. The Montford Point Marine Association and the Office of U.S. Congressman William Timmons (SC-4) facilitated his receiving the long overdue medal in a special ceremony earlier this year. He was so happy and proud to receive the honor.

Receive notifications about information and event scheduling for Leroy

We encourage you to share your most beloved memories of Leroy here, so that the family and other loved ones can always see it. You can upload cherished photographs, or share your favorite stories, and can even comment on those shared by others.

The Hall Family sent flowers to the family of Leroy Richardson Sr..
Show you care by sending flowers

Posted Aug 12, 2019 at 02:31pm
The Hall family's thoughts and prayers are with the Richardson family.

The Hall Family purchased flowers for the family of Leroy Richardson. Send Flowers

Posted Aug 12, 2019 at 09:18am
May the family of Leroy Richardson be comforted by God's love and peace during this difficult time. Our thoughts and prayers continue to be with you.

Rays of Light Spray was purchased for the family of Leroy Richardson. Send Flowers 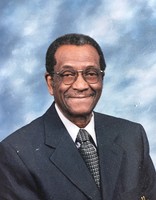