To share your memory on the wall of Isabella Mims Todd, sign in using one of the following options:

Sister Isabella Mims Todd was a life member of Rock Hill Baptist Church #1 (RHBC #1), where she served faithfully and held the longest membership. She was also a granddaughter of the late Tobie Allen, who was one of the founding members and first deacons of RHBC #1. Sister Todd served the church as an Usher, Sunday School teacher, on the Sick Committee and Kitchen Committee. She sang on the Do Re Mi Choir, Gospel Choir and the Senior Choir. She was a member of the Missionary for 70 years and served as President of the Missionary for 44 years, first elected in 1973.  Sister Todd attended the Rock Hill School as a child and worked in the school cafeteria, the school was located in the vacant lot next door to the present church.

Sister Todd also served faithfully with the Enoree River Baptist Association Women’s Ministry as a Chaplain, on the nominations committee and banquet committee. She also served as Treasurer for the Sally Barksdale Scholarship Fund.  She was an active participant in the Union meetings, the Baptist Women’s Conventions, and the Baptist Congress of Christian Education.  She traveled from place to place representing RHBC# 1, always with a caring spirit for the betterment of her church.

Sister Todd’s motto was formed through the songs she loved: “I have had my share of ups and downs and I will trust in the Lord with all my heart and I won’t give up now.” May the work Sister Todd has done, the life she lived and the service she gave, speak for her.
Read Less

Receive notifications about information and event scheduling for Isabella Mims

We encourage you to share your most beloved memories of Isabella Mims here, so that the family and other loved ones can always see it. You can upload cherished photographs, or share your favorite stories, and can even comment on those shared by others.

Posted Dec 10, 2019 at 01:30pm
We are thinking of you during this difficult time. With deepest sympathy. 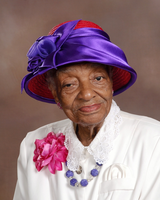