To share your memory on the wall of Inez Mahaffey, sign in using one of the following options:

Provide comfort for the family of Inez Mahaffey with a meaningful gesture of sympathy.

She received a bachelor’s degree in Education from Morris College. She spent a number of years as a seamstress at Sew Magic and Varacht Sewing Company for many years. She and her dear friend Jessie Durham founded a Workers Union there to promote employee rights. After she left Varacht Sewing Company, she found joy in her passion as a teacher at A Child’s Haven in Greenville, South Carolina.

She joined Mt. Sinai Baptist Church at an early age and remained a faithful member. Her church attire wasn’t complete until a hat adorned her head! Inez held several positions at Mt. Sinai over the years including Financial Secretary and Sunday School teacher and sang in the choir. She was the President of the Missionary Ministry until she was physically unable to perform her duties.

She served as President of Reedy River Baptist Women’s Ministry from 2005-2010. She was the founder and organizer of the Women’s Missionary Choir.

She answered the Master’s call on Thursday, October 24, 2019, at McCall Hospice House in Simpsonville, South Carolina.

She leaves to cherish loving memories, an exceptionally devoted niece and nephew, Sharon Johnson Hudgens and Bennie Lee Johnson; two greatly devoted great-nieces, Sonya Hudgens Cunningham and Rhonda Hudgens Carr; a host of caring nieces, nephews, great-nieces and nephews, other family and friends including Faye and Jimmy Wilson, who faithfully visited and transported Inez through the years; and her in-laws, James (Patricia) Wright and the remaining Mahaffey family.
Read Less

Receive notifications about information and event scheduling for Inez

We encourage you to share your most beloved memories of Inez here, so that the family and other loved ones can always see it. You can upload cherished photographs, or share your favorite stories, and can even comment on those shared by others. 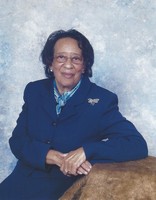