To share your memory on the wall of Felicia Roberts, sign in using one of the following options:

Felicia attended Richland County schools in Columbia, SC, and was a proud member of the Eau Claire class of 1991. She attended Greenville Technical College, where she studied Nursing. She began her professional career with the Greenville Hospital System and worked until her health failed. But in typical Felicia fashion, she could not be idle, so she went to work for Alorica/Samsung in 2014. She worked as often as her health permitted.

Felicia obeyed the gospel at the I85 Church of Christ and was added to the Lord’s church in 1994. She loved the Lord and was active in the Ladies Bible class, even facilitating the class on occasion. She was known for her sweet spirit, encouraging words, quick wit, and ready smile.

Surviving along with her mother, are her devoted husband, Boris Roberts of the home; one son, Christopher DeShaun Roberts of Greenville; one granddaughter, Aaliyah Marie Roberts of Greenville; in-laws, Brunson and Priscilla Roberts and Antonia Roberts, all of Greenville; special cousins, Valorie (Keith) Simmons and Cynthia (Montauge) Johnson, both of Greenville; an aunt, Dessie Croswell of Lexington, SC; two uncles, Daryl Chavis of Paris, TX, Norman Griffin, Jr., of Easley, SC; and a host of other relatives and friends.
Read Less

Receive notifications about information and event scheduling for Felicia

We encourage you to share your most beloved memories of Felicia here, so that the family and other loved ones can always see it. You can upload cherished photographs, or share your favorite stories, and can even comment on those shared by others.

Davida Viva and Family sent flowers to the family of Felicia Roberts.
Show you care by sending flowers

Posted Dec 06, 2019 at 01:06pm
From days in school until now, you were always so joyful and a pleasure to be around! I thank God for our time together. The Eau Claire High School class of 1991 will forever remember your loving spirit.
May the peace of God cover your family as they remember the life you lived and legacy of love you leave behind.

Posted Dec 06, 2019 at 11:05am
Boris and Family, Felicia was a great friend when we attended Bethlehem Baptist Church. May God bless and keep you now and always.

Flowers were purchased for the family of Felicia Roberts. Send Flowers 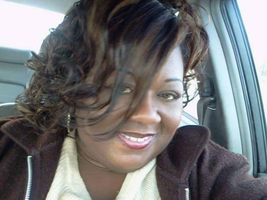