To share your memory on the wall of Mamie Lee Collington, sign in using one of the following options:

She attended Sterling High School in Greenville County Schools. She was a devoted worker in the manufacturing field for many years and was a housekeeper for several families in the Greenville area. She was joined in holy matrimony to Edward Earl Collington on August 11, 1959 and into this union, four daughters Carolyn, Sheila, Sharon and Karen were born.

She joined Tabernacle Baptist Church at a young age and served faithfully for many years. She was a member of several committees at the church including the Mother’s Guild, the Seniors on the Move and the Floral Choral.

She was preceded in death by her parents; her husband, Edward Earl Collington; brothers, Hodges Johnson, Julius Johnson, Jr., and Walter Johnson; her sisters, Nell Makins and Leuvenia Edwards; as well as her great-granddaughter, Madison Collington.

Receive notifications about information and event scheduling for Mamie Lee

We encourage you to share your most beloved memories of Mamie Lee here, so that the family and other loved ones can always see it. You can upload cherished photographs, or share your favorite stories, and can even comment on those shared by others. 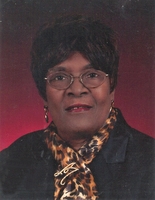