To share your memory on the wall of Betty Perry, sign in using one of the following options:

Betty Jean attended the public schools of Greenville County and was a graduate of Berea High School. She was employed with the Lear Corporation.

She was preceded in death by a sister, Faye Yvette Kirksey, and two brothers, William David Perry and Douglas Allen Perry.

Many fond and loving memories will be cherished always by her daughter, Octavia Perry of Greenville; a son, Willie (Crystal) Perry of Greenville; one sister, Dorothy Ann Duckett of Greenville; four grandchildren, Roshonques Perry, Tydrekius Perry, Autumn Perry and Jaceoron Perry; one great-grandchild, Anyla Johnson; and a host of nieces, nephews, other relatives and friends.
Read Less

Receive notifications about information and event scheduling for Betty

We encourage you to share your most beloved memories of Betty here, so that the family and other loved ones can always see it. You can upload cherished photographs, or share your favorite stories, and can even comment on those shared by others. 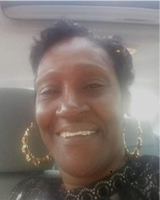