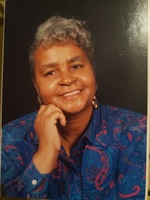 Mrs. Bessie Lee “Sister” Pendergrass, was born January 28, 1944, to the late David Thompson and the late Lula Mae Taylor. She entered the presence of God, her Heavenly Father on July 24,2019, at Prisma Health Upstate.

Bessie was the devoted wife of the late James Preston Pendergrass and the loving mother of four: Evonne (Clevan) Oliphant, James Pendergrass, Erwin (Carol) Pendergrass and Nathaniel Pendergrass, to whom Bessie modeled Christlike character until the day she entered her rest.

Bessie was very young when she began her spiritual journey. It was at the tender age of 16 that she joined Lowndes Hill Baptist Church where she committed her heart to Christ and devoted her life to God and to the service of His Kingdom. Bessie served faithfully as an usher, a choir member, and in missions for many years. She especially enjoyed taking care of the elderly and visiting the sick. Special care and hospitality for the elderly came very natural to her. Bessie even took care of her grandmother, the late Bessie Jones, for many years. Bessie has been correctly described as faithful, devoted, steadfast, and dedicated. She served God most of the days of her seventy-five years here on earth. She shall humbly wear her crown for eternity as she basks in the wonderful presence of her Great Lord and Savior Jesus Christ.

Bessie retired from the Greenville County School District where she worked in the cafeteria and as a bus driver.

All rights reserved. This obituary is also archived at obittree.com