To share your memory on the wall of Almeda Taylor, sign in using one of the following options:

Provide comfort for the family of Almeda Taylor with a meaningful gesture of sympathy.

She was a graduate of Bryson High School and a member of the Order of Eastern Stars, Ruth Chapter #69, since 1977, where she previously served as the Worthy Matron and other positions. She was a faithful and dedicated member of Cedar Grove Missionary Baptist Church.

Almeda was preceded in death by her beloved sons, Barry and Sean Taylor; and three siblings, John “Wink”, Gerald and Ronald “JoJo” Sullivan.

We encourage you to share your most beloved memories of Almeda here, so that the family and other loved ones can always see it. You can upload cherished photographs, or share your favorite stories, and can even comment on those shared by others. 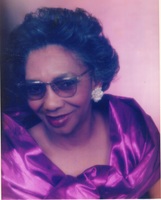