To share your memory on the wall of Adranna Watson McBee, sign in using one of the following options:

Provide comfort for the family of Adranna Watson McBee with a meaningful gesture of sympathy.

“Abby” received a BA in Psychology from Columbia College in 1981 and an MAT in Elementary Education from Anderson University in 2017. She was employed by the Greenville County School District. She was a member of Israel Metropolitan CME Church where she sang in the Mass Choir.

She was preceded in death by her father, Norwood McBee, and her husband Roscoe Watson, Jr.

We encourage you to share your most beloved memories of Adranna here, so that the family and other loved ones can always see it. You can upload cherished photographs, or share your favorite stories, and can even comment on those shared by others.

Posted Oct 28, 2019 at 07:50pm
Leslie, our hearthfelt condolences to you and your family during this time of sorrow. You're in our thoughts and prayers . We love you LS.

Posted Oct 27, 2019 at 09:23pm
With Heartfelt Sympathy and Love! Our prayers are with you through this difficult time, Love Emily & Tyler Howard. 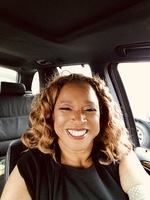